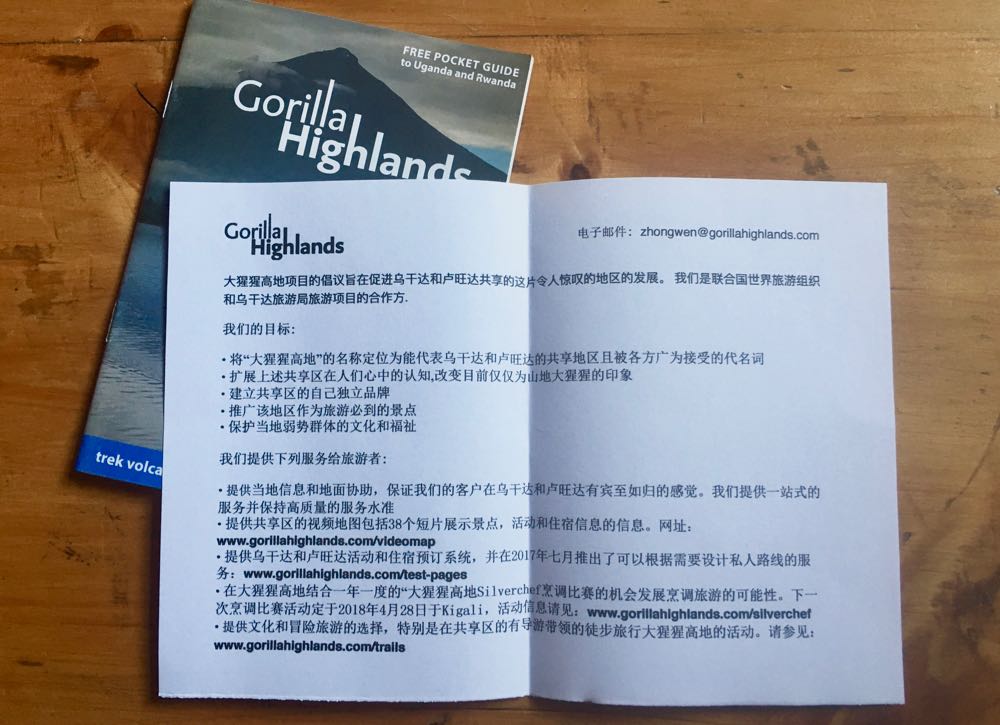 A group of Chinese tour operators returned from a Uganda trip this week. Among the many brochures they have brought to their offices in Beijing and Guangdong is a little thing from us: the Gorilla Highlands Pocket Guide to Uganda and Rwanda with an accompanying leaflet in Mandarin.

It all happened very quickly—and was rather personal. That’s why we are, after a couple of months of silence, re-starting Miha’s Blog on the Gorilla Highlands website…

I heard about the arrivals from China only a couple of days before, as a by-the-way in a phone call with my friend Sylvia Kalembe of the Uganda Tourism Board (UTB). I definitely had to be part of that!

While most tourism professionals get excited because of the huge and growing market that China represents, my motivation was, above all, personal. As a bored student of journalism looking for bigger challenges, I once upon a time ran into a poster promoting a free course of Chinese language. I enrolled and then made the next step: I was in the first generation of Slovenian students doing Sinology as a university program.

I was supposed to be at classes at two different faculties, often at the same time, and I eventually realised I had to decide on one of them if I was to ever graduate. I opted for journalism, as I was further ahead with it. But I had fallen in love with the Chinese way of writing and got sufficiently intrigued by their culture that it felt like a real loss. I even took my Chinese textbooks to Africa, hoping I would find time to rehearse…

I didn’t. All that is left 20 years later is affection and two good friends in China. 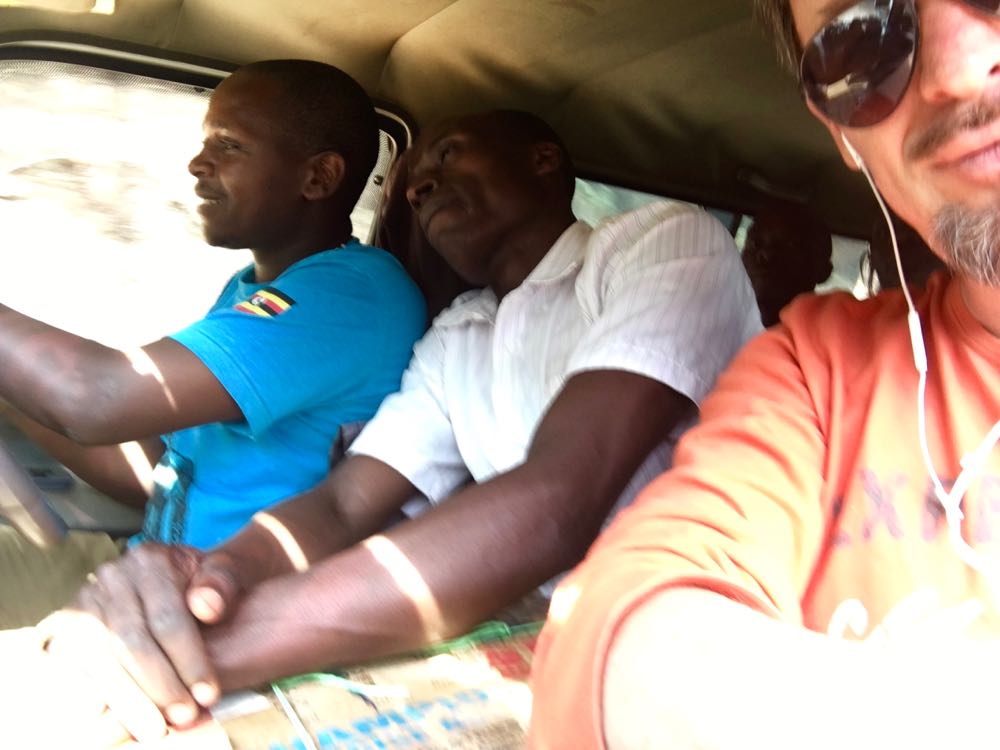 Willy Weng who studied economics in Slovenia now lives in Shanghai. He hadn’t heard from me in months, yet was immediately ready to help out: within a few hours he translated a page into Chinese. What wasn’t an easy text at all—touristy lingo, exotic terms and so on—looked like a piece of cake to him. I gratefully printed it and rushed towards Ruhija.

Ruhija is one of the gorilla tracking starting points in Bwindi Impenetrable National Park, a village with a growing number of lodges. Some years ago I edited a video about one of them, Ruhija Gorilla Lodge, and that proved to be the destination for the Chinese delegation arriving by plane through Kihihi.

Every time I travel on the dirt public road through the forest vastness of Bwindi I have one big hope: to run into forest elephants. They are not easy to find and can actually disturb unfortunate drivers who cross their path. Well, the only animal I noticed from our shared minibus connecting Kabale and Ruhija was the duiker. An exotic thing by itself, however, when you are after elephants you can’t really care about some little dark antelopes, can you?

The first Chinese guest I met was Silence He. Within seconds she was asking me about the details of different travel routes within the Gorilla Highlands region, and I was thrilled to be of help. Her connection with our continent is deep: she has a child with a Nigerian gentleman. 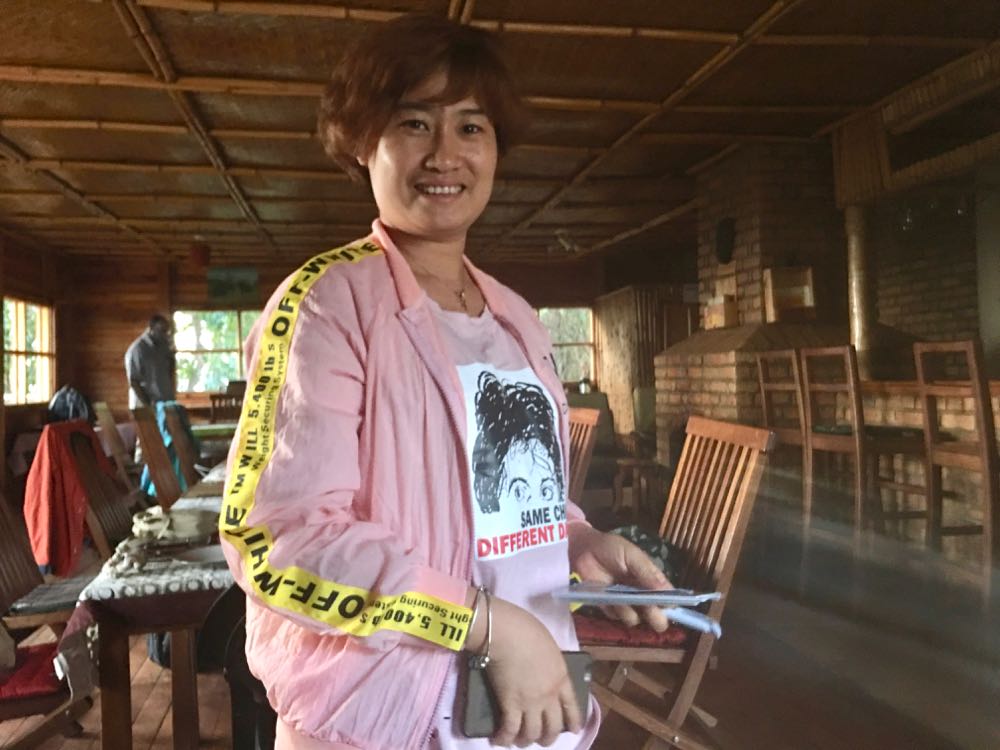 Some hours later it was my time. I presented everything that matters in southwestern Uganda, overcoming the language barrier with Video Map items. One of the visitors, Dr Gao Fu, was more than comfortable in English, social and talkative. He is the president of the Tourism and Hospitality Committee of the World Federation of Chinese Catering Industry.

Dr Fu was the one pouring wine into my glass.

Compulsory after-hours drinking was the part of the Chinese businesses culture that Sonja had helpfully reminded me of. Sonja Knez and I studied the same combination in Slovenia, journalism and Chinese, but unlike me she did follow through. She stays in Dongguan these days, very close to Hong Kong. 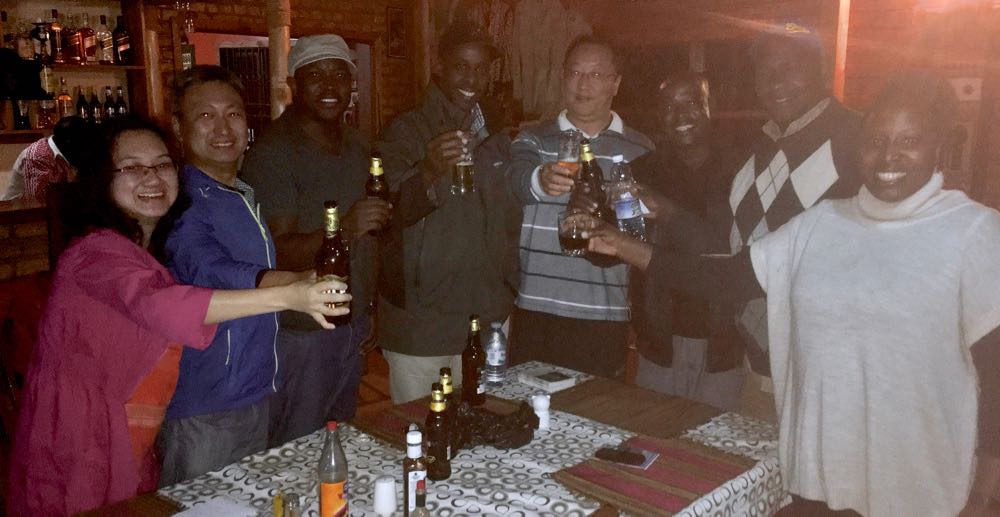 The enthusiasm with which Dr Fu was refilling my drink, ha! It reminded me of the customs and warmth of the Balkan peoples, and it helped the conversation and the connection the way alcohol is meant to. We had good fun with the delegation from UTB and the Ugandan consulate in Guangzhou, led by Consul General Ambassador Solomon Rutega, as Dr Fu was sharing his plans:

“I decided to form the Travel to Uganda Alliance to guarantee Chinese visitors for 2018, the 25th anniversary of gorilla tracking. We expect a new high of 30,000 Chinese tourists next year. By 2020 I think visitors from China can reach 50,000, and by 2022 I believe the Chinese can surpass Americans as Uganda’s number one sourcing country.”

No numbers or goals were on my mind as I descended the hill towards the trading centre of Ruhija, hoping to find accommodation at 11pm. The night was bright, there were stars above me and the immense rainforest on my right, and I was tipsy enough to be especially happy. Nine months after I first attempted to make a Chinese connection, I finally got it.

Next morning I visited all lodges in Ruhija to see what was new, made friends with a police officer (you never know when you will need such connections), and then caught a motorcycle back to Kabale, driven by Ainaman Rethan who distributes mobile phone airtime in the region. Travelling on a two wheels increases your chances of seeing elephants but alas… 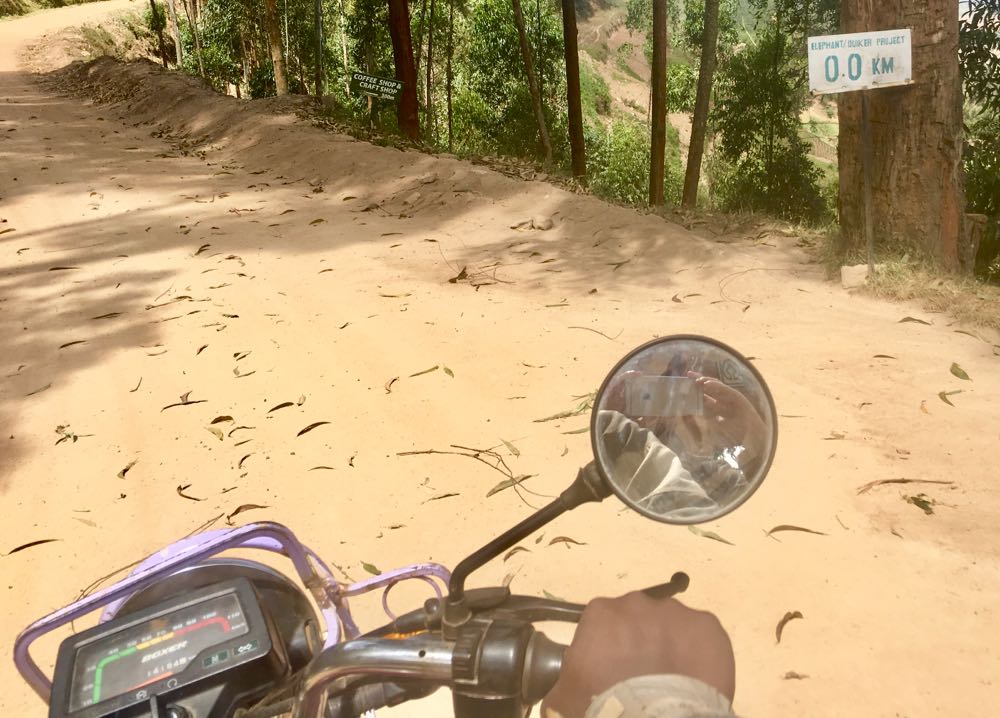 Dr Fu and eight tour operators checked on the gorillas and then continued by car to Queen Elizabeth National Park. Before they left Africa they also got a taste of Jinja. All in all, something very close to what a Uganda-only Gorilla Highlands tour would look like…

Silence He said: “I have been to Africa before, enjoyed a savannah safari in Tanzania and Namibia, so to me the unique moment was meeting the mountain gorillas. This is really something special! I am thinking about combining a Uganda trip with Nyiragongo, the active volcano in Congo, and with a Rwanda experience.”

Dr Fu, who had never been to Africa before was naturally very excited: “The gorillas were peaceful and lovely and Queen Elizabeth National Park was wonderful. Mweya Safari Lodge was a very nice experience and we got lucky and even saw leopards. The equator line and Jinja we also enjoyed very much. Ugandan people hospitable and warm-hearted. I really love this country.” 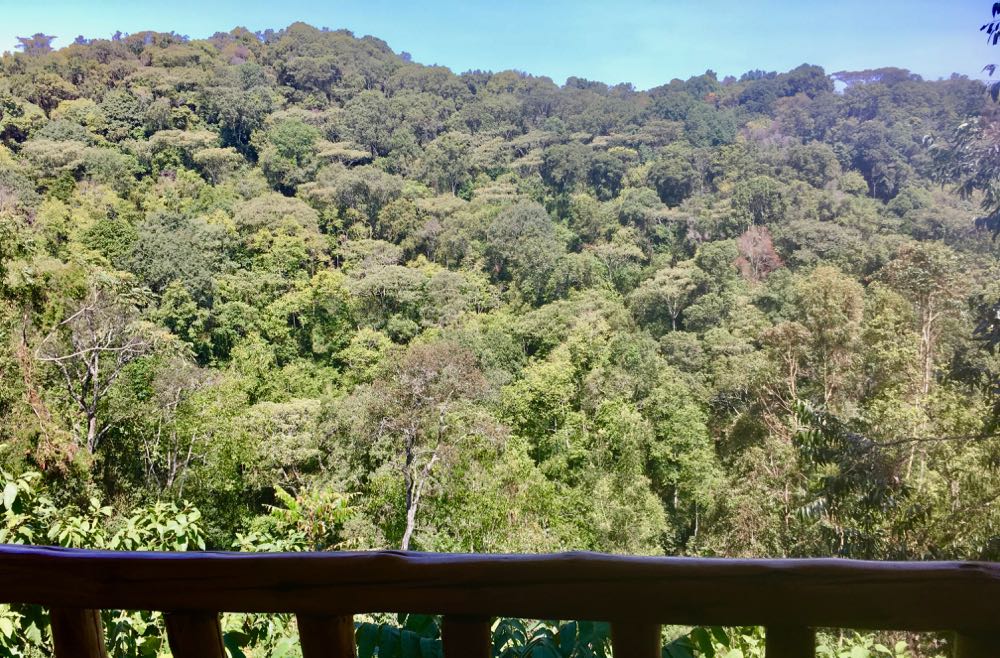 Ambassador Rutega’s efforts have therefore already borne fruit. Uganda has impressed a well-connected man in Beijing who will not stand still. My personal efforts will be towards steering the upcoming thousands of new travellers towards responsible tourism, towards deep, high-quality experiences that directly benefit local people. Mass tourism is not for our region.

If that pushes me back to writing those beautiful Chinese characters that I once knew hundreds of, even better.