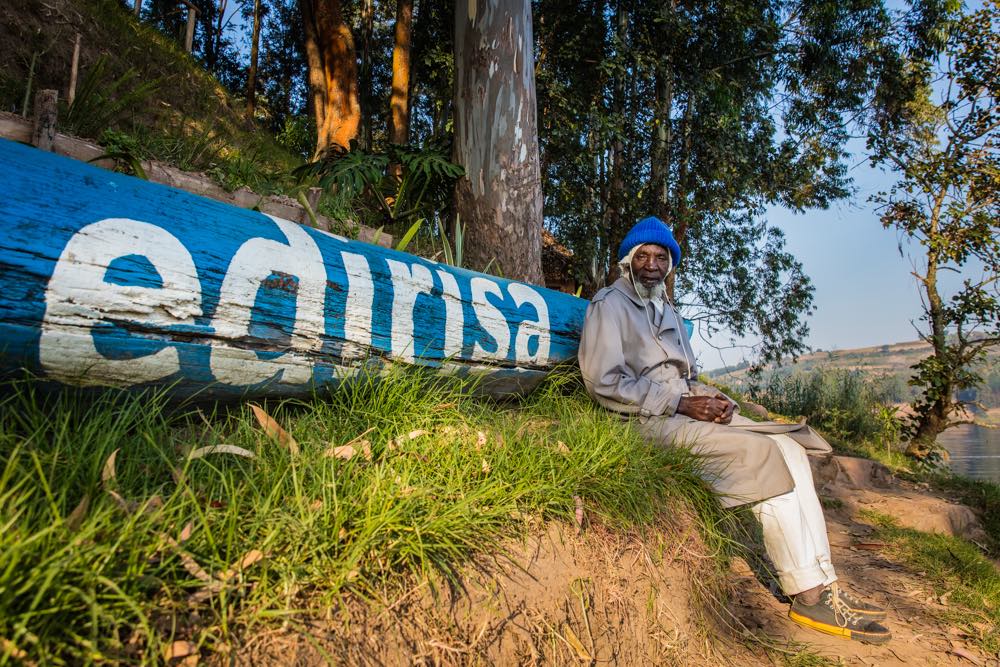 Earlier this month we told you how we were hosted, for the tenth consecutive time, by Tom on a remote island of Lake Bunyonyi. That was an amazing way to greet the new year but, you know what, Tom Karemire can make just any night special! If you are looking for a great family-friendly, culturally rich experience in the heart of the Gorilla Highlands of Rwanda and Uganda, then his homestay is certainly an experience to check out.

After 12 years and 3 months working as a nightwatchman at Edirisa, in 2016 Karemire retired from his job to concentrate on the community overnight he hosts at his island home. His second retirement (he previously used to work for Uganda Prisons) came as a result of dimming eyes, a problem many ageing people encounter. … Yes, Tom is growing old. Watching him work so hard, witnessing his easy interactions with all sorts of people, you’d be hard pressed to guess that he is in his 70s.

Born in 1944 into a family with deep island roots, Tom Karemire grew up on Habukomi, an island in the central part of Lake Bunyonyi that remains his home to date. During the Habukomi tour, you can’t miss Tom’s favourite spot; a tree in the distinctive bottleneck section of the island, which was planted to mark his birth.

He brought his wife Provia—the only wife he has ever had, he proudly stresses—from the mainland to this island and she gave him 7 children here. Today Tom has five people under his care. Two of his kids are still in school and Tom is responsible for their academic welfare and well-being. The youngest, Felix Kabusheshe, graduated from high school in 2016 and his sister Praxdar Kyomuhangi is soon accomplishing her first degree in Secretarial Studies from Kampala University.

But regardless of the financial constraints, Tom is the kind who never quits. His ambitious plans to make Tom’s Homestay an unforgettable experience for every last one of his visitors dominates his to-do list for 2017. He is preparing to extend his house so that those visiting him can have more accommodation options other than the one that’s been in use for the last 12 years—that of pitching tents in his compound. To this effect, Tom is not only saving up, but he has as well single-handedly made bricks to have the project up and running as soon as possible. He wishes that every other month of the year turns out like June, July and August, the months with greatest turnovers.

If you try Tom’s Homestay out during quieter months and away from big groups, you will get more of your host. His first and absolute priority is to feed everyone with a delicious buffet consisting of vegetarian delights and crayfish, but once that is under his belt, he will sit down at the campfire, ready to be teased into a conversation.

Asking Tom about his mountain gorilla tracking is a promising warm up: he didn’t have a camera but had his photographic memory to rely on; he narrates his gorilla tracking experience of 2014 like it happened yesterday.

Tom is not the kind of guy anyone would shove ideas down his throat. He means business when he chooses to. His somewhat harsh face and his security professional’s demeanour exerts an authoritative presence that almost makes it hard for anyone to step into. He however has a soft spot when it comes to beautiful, smiley faces of members of the opposite sex. He lights up in their presence and can become surprisingly chatty…